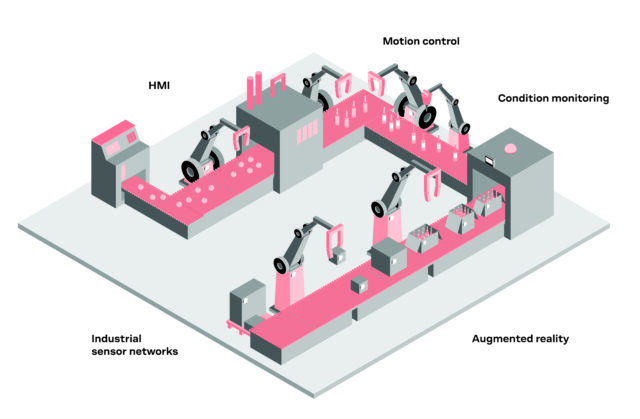 Smart factories are harsh environments for wireless communication technologies. Let's see how Wi-Fi continues to evolve to continue being able to overcome this challenge.

When Wi-Fi began to be installed in connected factories, their task was simple: get a few devices to communicate with each other. Today the situation is completely different. If only a decade ago the smart factory was like an empty square, now it is more like a bustling market. The place is the same, but the context has changed radically. Just like in a noisy marketplace, the air is thick with airwaves, and devices have to travel long distances to be heard.

Fortunately, wireless technologies have continued to evolve in order to meet the increasingly demanding needs of the markets they serve. And Wi-Fi is no exception. In this article we will look at how the advance of digitization in factories and new applications drive demand for Wi-Fi, the wireless technology that carries around 45% of global IP traffic and 60-80% of wireless traffic.

Wi-Fi has come a long way since the days (just two decades ago) of barely offering 54 Mbps. In 2009, Wi-Fi 4 (or IEEE 802.11n as it was previously known) took a huge leap in performance along with the 5 GHz band introduced in IEEE 802.11a and the higher data rates in both bands. The compatibility of Wi-Fi 4 access points with devices running earlier versions of the technology helped drive adoption of this technology.

In 2013, Wi-Fi 5 (or IEEE 802.11ac) took another leap in performance to 6,8 Gbps, albeit only in the 5 GHz band. More recently, Wi-Fi 6 doubled down with improvements to its performance on all fronts, specifically its ability to handle more traffic, a much larger number of customers more efficiently, hence it is also sometimes referred to as High-Efficiency Wireless (HEW).

In this article, we will explore the innovative advances that Wi-Fi 6 has brought to meet today's requirements for high performance (close to 10 Gbps), as well as providing reliable performance over long distances, with low latency, minimal consumption, coexistence and fast transfer.

As each new version of the Wi-Fi standard has raised performance to new heights, the technology has found its way into increasingly sophisticated and demanding applications. At the same time, it has continued to drive the demand for new improvements in the standard in order to cover the wireless communication needs that have arisen, including those common in industrial facilities.

La high availability It is paramount in industrial plants where downtime translates directly into lost revenue. In crowded RF environments this requires robustness against interference from other devices, as well as high performance to shorten transmission times and quickly free up bandwidth after each communication. guarantee the Scalabilityie the ability to connect additional clients to the network without the need to add access points, is key for Wi-Fi to offer network connectivity to an ever-increasing number of devices. 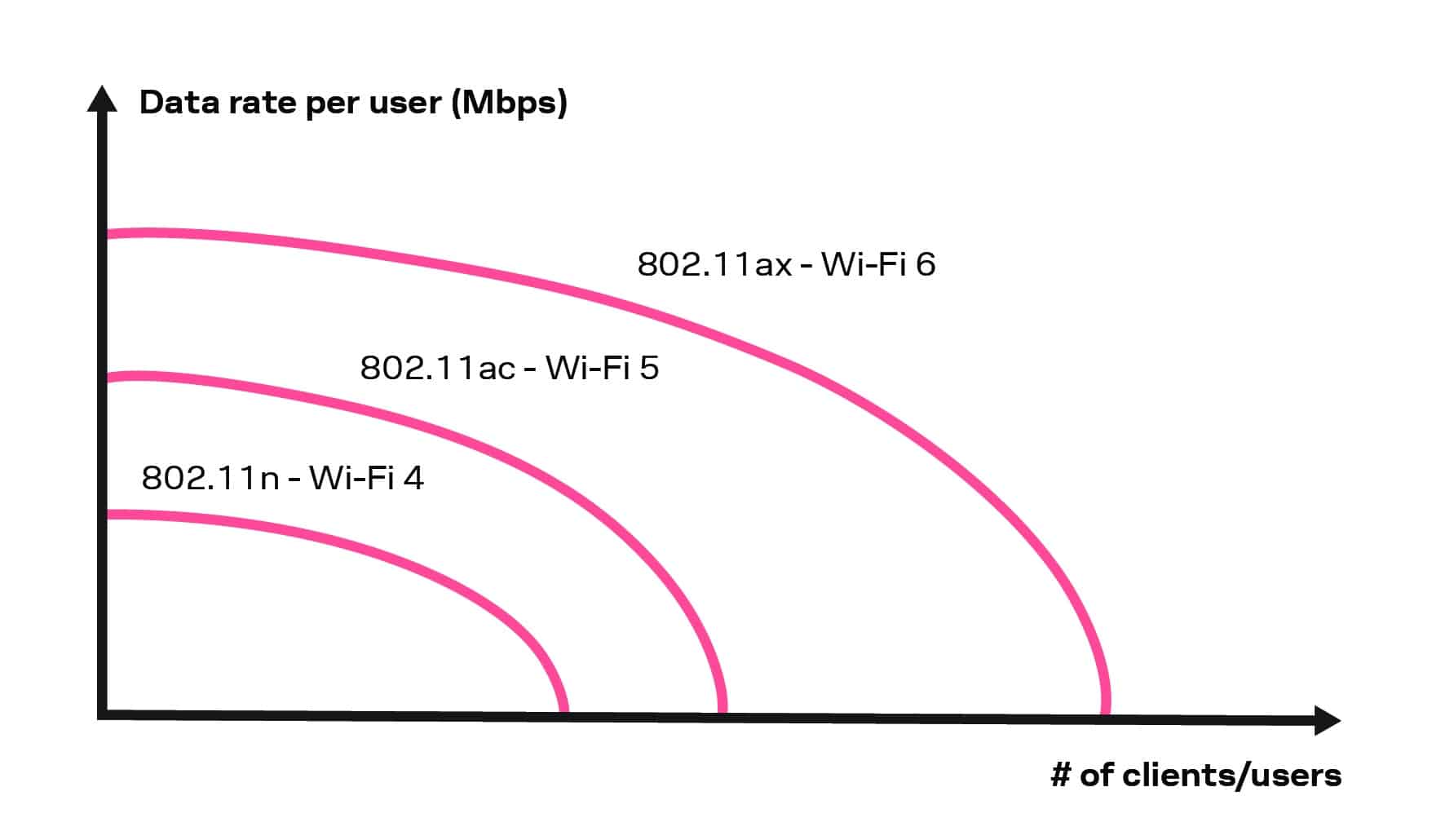 The fast response times they are essential for industrial automation systems used, for example, to organize processes in complex production lines. With more and more mobile devices connected to the network, from robots to smart power tools, the roaming fluidity is gaining importance in order to avoid lengthy reconnection attempts when the device enters the area covered by a new access point. In addition, to simplify operations and keep costs low, a easy commissioning and maintenance.

If Wi-Fi 4 provided “high performance” and Wi-Fi 5 “very high performance”, Wi-Fi 6, which was introduced in 2018, has focused on “high efficiency”. The jump from 6,8 Gbps to 9,6 Gbps may be less dramatic than some order-of-magnitude increases in previous versions, but where Wi-Fi 6 really shines is in its more efficient use of available bandwidth as it allows hosting more clients per access point without affecting the performance of the network.

The key to efficiently handling a larger number of customers is a series of technological innovations:

MU-OFDMA quadruples the number of clients that a given number of access points can handle.

The same technologies that have increased client densities have also increased performance: Instead of cutting bandwidth to serve multiple devices, MIMO can pool bandwidth and make multiple streams available to a single client.

By allowing the simultaneous transfer of data to or from multiple clients, MU-OFDMA helps reduce congestion, a common problem in dense networks, to ensure data delivery with minimal latency.

And thanks to the new function TWT, access points can command devices to go into a low power mode with pre-programmed wake-up times. The very long feasible standby times can significantly improve battery life, especially in wireless sensors that only transmit data sporadically.

To overcome the main limitation of resources, which is the available spectrum, regulatory bodies such as the FCC in the US have opened up the 6 GHz band for license-free Wi-Fi communication, doubling or more in some cases the previously available spectrum by adding the 2,4 and 5 GHz bands. Access points and end devices capable of using the 1200 MHz of the new spectrum will be referred to as Wi-Fi 6E.

Advantages of the 6 GHz band include its proximity to the already widely used 5 GHz band as well as the abundance of non-overlapping channels with various channel sizes. And because the new spectrum is so underutilized, the devices won't have to compete with previous customers crowding the airwaves.

Wi-Fi has become a mainstay in smart factories, the wireless technology of choice, often supplemented by Bluetooth, as well as both proprietary and non-proprietary cellular communication technologies. It is likely that
Wi-Fi 6 cements its position with many of the new features listed above.

The image below shows the apps that are likely to benefit most from Wi-Fi 6 improvements.

Industrial sensor networks: Wirelessly connected sensors have become widespread in industrial plants and are used, for example, to monitor vibration and temperature in predictive maintenance. At present they are usually based on communication protocols with optimized consumption, such as Bluetooth low energy or IEEE 801.15.4.

Wi-Fi 6 is low consumption because it allows devices to go to sleep for long periods of time through the new TWT function. Reducing their energy demand makes Wi-Fi sensors increase their autonomy and simplify their maintenance. In addition, the disconnection of the devices reduces spectrum congestion.

Movement control: The improvements in latency and quality of service offered by OFDMA make Wi-Fi 6 a promising wireless communication technology for control applications. At the same time, device settings are likely to continue to benefit from the low energy and ubiquity of Bluetooth.

Human-machine interfaces (HMI): The ability of Wi-Fi 6 access points to handle a higher density of devices while maintaining good performance on each device, along with low latency, make Wi-Fi 6 a promising technology capable of enabling simple HMIs. tablet-based and used to read data from connected machines and even from more advanced augmented reality HMIs.

Augmented Reality (AR): The natural advancement for HMIs using static or portable graphical user interfaces is augmented reality. Whether through tablets or smart glasses, augmented reality can superimpose real-time information, documentation or plans on the image of a camera on the tablet or, through smart glasses, in the user's field of vision. Augmented reality can enable engineers to schematically visualize the inner workings of their machines and assess issues without interrupting production processes.

Mesh networks (mesh): Mesh technology has various applications in industrial plants, such as centralized control of smart lights in facilities and the collection of distributed sensor data for processing in the cloud. While Bluetooth remains the most widely used wireless technology for sending data between nodes and up to the gateway, Wi-Fi is better suited for the final leg of transmission between the gateway and the enterprise cloud. It remains to be seen if the low consumption of Wi-Fi 6 manages to facilitate the more widespread adoption of mesh solutions.
Wi-Fi in the industrial segment.

Other types of factories connected by Wi-Fi

While Wi-Fi 6 outperforms Wi-Fi 4 in almost every way, many apps are covered perfectly by the older version of the technology. In these cases, it occurs, plant managers can take advantage of the lower cost and simplified development of Wi-Fi 4.

Just as Wi-Fi 6 is consolidating its new niche, efforts are being made to elevate performance even further with the Wi-Fi 7 version, expected to be released after 2024. According to the IEEE and the Wi-Fi Alliance, which drive the development of Wi-Fi standards, Wi-Fi 7 will focus heavily on video features such as deterministic latency, high reliability, and quality of service. It will also triple the performance (30 Gbps) thanks to its wider channels (up to 320 MHz) and higher QAM modulation orders.

Smart factories continue to gain momentum and in parallel will continue to rely on a suite of complementary wireless communication technologies based on Wi-Fi, Bluetooth, 4G LTE, 5G and others. The new features offered by Wi-Fi 6 – higher data rates, lower latencies, lower power consumption, greater network capacity and longer range – have the potential to expand the introduction of this technology in smart factories. Thanks to the proximity of the Wi-Fi Alliance to the industry, it is well aware of its needs, so it is expected that Wi-Fi will continue to cover the needs of industrial applications that arise over time. 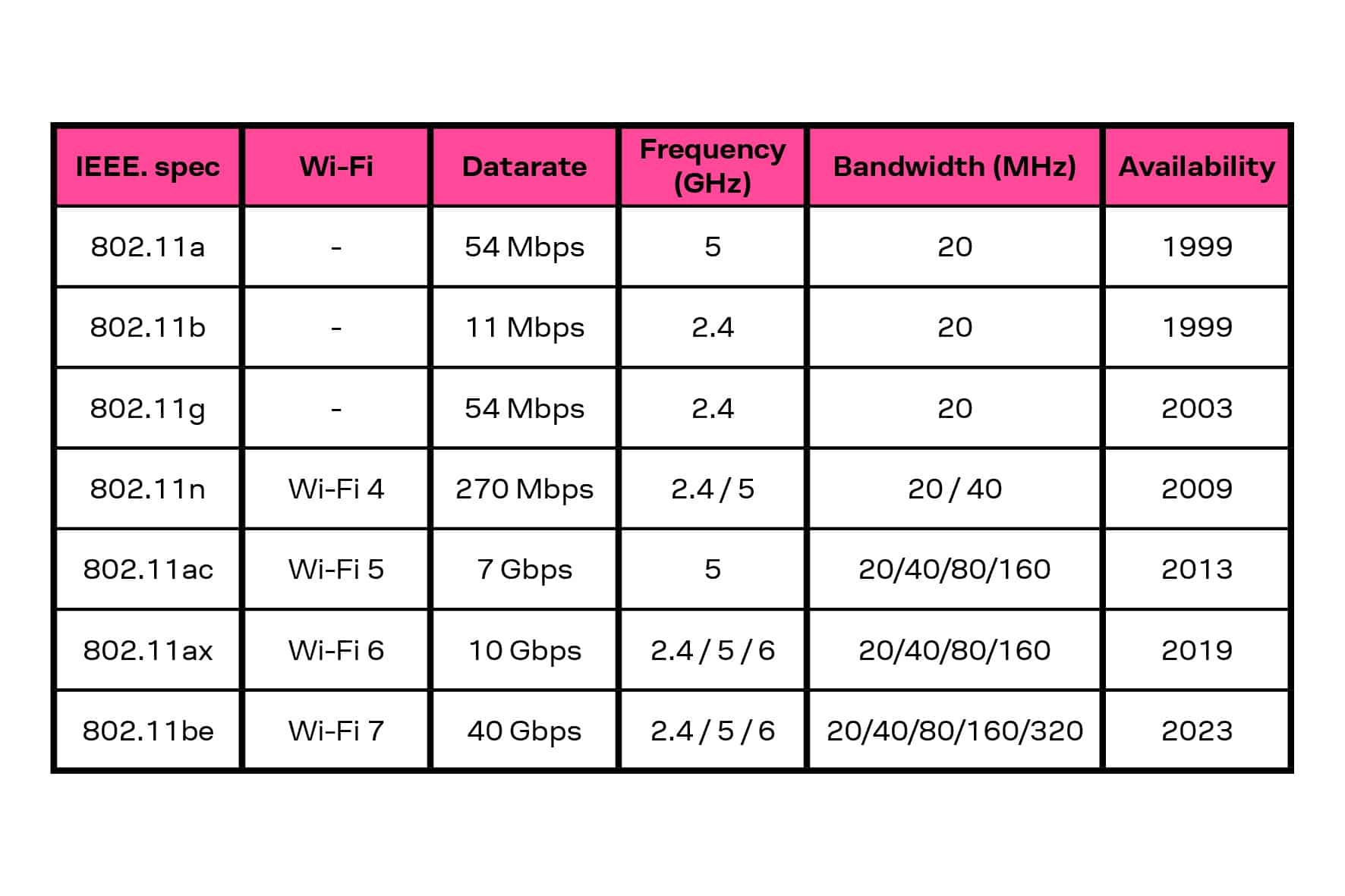