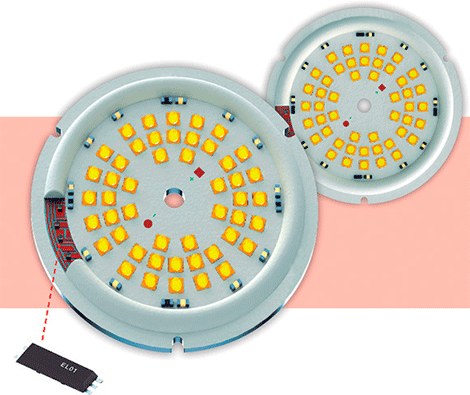 Alternative to PSUs. Suitable circuits allow LEDs to be operated directly on mains voltage without a power supply unit. The solution is scalable and space-saving. Its also allows LEDs to be dimmed evenly and without flickering.

The electric light bulb served us well for over 100 years since it was invented by Edison in 1879.

Light-emitting diodes were discovered as luminescent crystals about 60 years ago and have made triumphant progress since then. Power supply units for operating LEDs have also been available for many years.

But since the invention of ICs which can be operated directly with 230 V AC while supplying LEDs with direct current, the question arises whether conventional power supply units are still required.

LED lights operated with alternating current have been successfully sold as series-produced items for many years. In the beginning these were Retrofit GU10 lamps with 8 to 10 W, followed by built-in spotlights and floodlights with 120 W and more.

EuroLighting developed the compact EL01 chip for controlling LED lights directly with 230 V AC, at low cost and with simple circuits. It increases the service life of the power supply to the level of light-emitting diodes with 50,000 hours and more. Components such as electrolytic capacitors and transformers are not required.

The sample circuit in figure 1 shows how an LED lamp with power supply can be built with only few components.

The operating principle of the AC chips is simple: The mains voltage is rectified and fed into an AC direct driver without smoothing.

This driver pulses with 100 to 120 Hz and supplies the LEDs with a constant current and a voltage between 60 and 70 V.

This allows LEDs from a variety of manufacturers with different voltages to be controlled directly as long as 70 V is not exceeded within a group.

Any power level can be achieved through parallel connection of several groups.

In an existing circuit, the power level can easily be adjusted by changing the resistance values.

One advantage of circuits with the EL01 is dimmability with leading edge control and TRIAC. Additionally, up to 24 W no further measures are required for complying with electromagnetic compatibility (figure 2).

Higher power levels can be achieved with small changes.

Flicker-free light is ensured at all power levels which meets the Japanese regulations for flicker-free light. In addition, the circuit can alternatively be operated with AC or DC. Space requirements are low: a circuit with 30 to 40 W only requires the space of two cigarettes (figure 3).

Competitors’ products generally consist of a large chip, focusing the dissipating heat on one point.

There are also significant differences during dimming. The EL01 chip allows even dimming by simultaneously dimming all LEDs in one   circuit (figure 4).

Some competitors’ chips implement sequential dimming of the individual groups. Individual LED groups are switched off in sequence (figure 5). This means the beam of light is not homogeneous and the LEDs of the lowest groups are used more often than those in the top group, which can affect the service life of the light-emitting diodes.