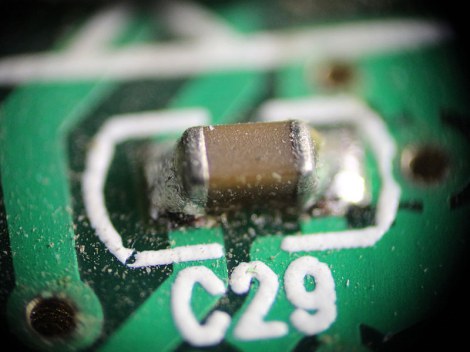 Surface-mount technology was developed in the 1960s and became widely used in the late 1980s. Much of the pioneering work in this technology was by IBM. The design approach first demonstrated by IBM in 1960 in a small-scale computer was later applied in the Launch Vehicle Digital Computer used in the Instrument Unit that guided all Saturn IB andSaturn V vehicles.[1] Components were mechanically redesigned to have small metal tabs or end caps that could be directly soldered to the surface of the PCB. Components became much smaller and component placement on both sides of a board became far more common with surface mounting than through-hole mounting, allowing much higher circuit densities. Often only the solder joints hold the parts to the board, although parts on the bottom or «second» side of the board are temporarily secured with a dot of adhesive as well. Surface-mounted devices (SMDs) are usually made physically small and lightweight for this reason. Surface mounting lends itself well to a high degree of automation, reducing labor cost and greatly increasing production rates. SMDs can be one-quarter to one-tenth the size and weight, and one-half to one-quarter the cost of equivalent through-hole parts.